The article focuses and educates on U.S. laws and regulations a German Small and Medium Enterprise (SME) must comply with when operating a business in the USA.  Besides that, the article explains German SME’s how to approach U.S. authorities and overcome cultural differences.

Yet, it is important that German companies obey all relevant laws in the U.S. In this context, the question often arises as to whether and to what extent SME’s should follow and implement U.S. compliance guidelines. Another topic is the implementation of digital compliance. Generally, the consequences of government investigations against SMEs in the United States due to the lack of financial resources are more serious than for a large enterprise. Society and the judiciary expect that German companies that operate in the U.S. observe all U.S. laws. German companies cannot hope of any favorable treatment by the U.S. authorities due to a lack of knowledge. But all measures an SME decides to implement should be in relation to each company’s actual risks, its size, and its industry.

You can read the full article here: https://rsw.beck.de/zeitschriften/ccz

Read up on more information about the pitfalls German companies encounter when entering the US market.

We're not around right now. But you can send us an email and we'll get back to you, asap. 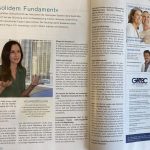